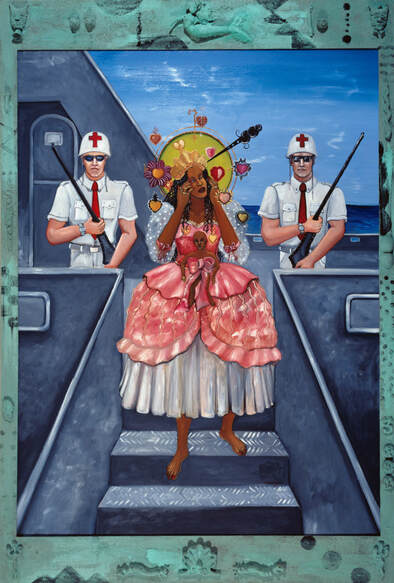 Vodou has a hero called St Jacques. He is a warrior and member of Ogou. He has many similar qualities to Mars, God of War. He is the lover of Erzulie Freda, who has many attributes similar to Venus, Goddess of Love.

This time of year is the awakening of earth energy. Both aggression and love making are providing impetus to acknowledge the momentous season of change.

Spirits are on the move, shapeshifters and beasts are promoting effortless movements to embrace inevitable change.

And for the new season, a fun video which you might enjoy:
Flying Penguins: World Penguin Day (from the BBC)

Aries ruled by Mars
The new moon on the 5th brings focus to your desires. There may be authority figures hanging out to impede the reckless momentum. It is your moment of pizazz. There is diversity and mischievous power that is yours for the asking. Allow others to be a part of the action.

La Sirenne, the mermaid image of Venus is slippery. Your perception of love and beauty are more grounded. The blood of the bull in the bullfight and in ceremony brings a huge life force to the querent. Blood like water is the sustainable flow of change. Be prepared for a chaos that brings new courage.

Remember to breath through the murkiness of water. You don’t have to swallow. Quicksilver, another name for liquid metal is poisonous but conducts heat, thermometer. You do often fly over water, your emotions. It keeps you interesting and challenged by others. The analogy of polar opposites is your strength.

Cancer ruled by the Moon

All the activity is not soothing. Your mothering qualities are not in demand. Be clear about your purpose and close your shell to those who would pry into the belly of your reasoning. Be aware that not everyone wants your opinion. Seek out Venus and her coquettish amusements.

Leo ruled by the Sun

Take a gamble. Fight fire with Fire. Your sense of morality and persuasiveness is in demand. You can heal old wounds with heat and calking. Allow the goddess Pallas Athena to guide you. She is the diplomatic conduit to your visions. Your gift to others is spontaneous creativity.

The intangible is your go to idea. You bring the various parts of a story to a conclusion. Your house is the place others want to be if you can let go of your personal frustrations there. If you need to travel, don’t think about all that could go wrong. Children will provide any structure.

You know how to handle the masculine energy, even in a female form. You maybe be called upon to offer unconditional support. It’s ok, it won’t last. A good debater can win when the point of view that is demanded is heinous. Healing yourself to enhance another’s lifestyle is a snap.

Baron Samedi is reincarnated as Darth Vader. The Lwa are not fixed forms in Vodou tradition. Like death, they reincarnate with alarming speed. Death, the absence of light and energy always regroups in another spot. See your family or those who feel like it, and start a new structure to build on.

Sagittarius ruled by Jupiter
​
Speak up, you will be heard. The voice has nuances and chemistry that the written word or text cannot fathom. Electricity is a form of fire that is sustainable in water. The sound of the sea is soothing and frightening. You can allay all fears of your own and others if you wish. Remember the magic in the tv show Boston Legal? The promise of dialogue pushes you to engage.

You forge the structure of long lasting concepts, buildings and persuasive propaganda. Timing is also in your bag of paraphernalia. Repetition is the discipline of time. You are supposed to contain the frivolous and by osmosis enhance the collective consciousness. With your brother Pluto at your side, impermanence is the cotton candy. Redecorate.

The angry creator serpent in African folklore is like the ouroboros, emblem of infinity. As a big picture thinker you are aware of the amalgamation of history. The universal turmoil we are all aware of is unlike any other in the known memory. As such we can formulate and alter perceptions in the blink of an eye. You are very good at this. Make your presence known.

Edward Lear was an illustrator/poet who wrote the Owl and the Pussycat. He recognized the healing power of nonsense. As the purveyor of healing pain, you can promote silliness. See a way for the absurd to make you wealthy. Showing up, talking, tickling etc., are all a neglected side of the Big Top. Be a ringleader.
As above
So below
Be well